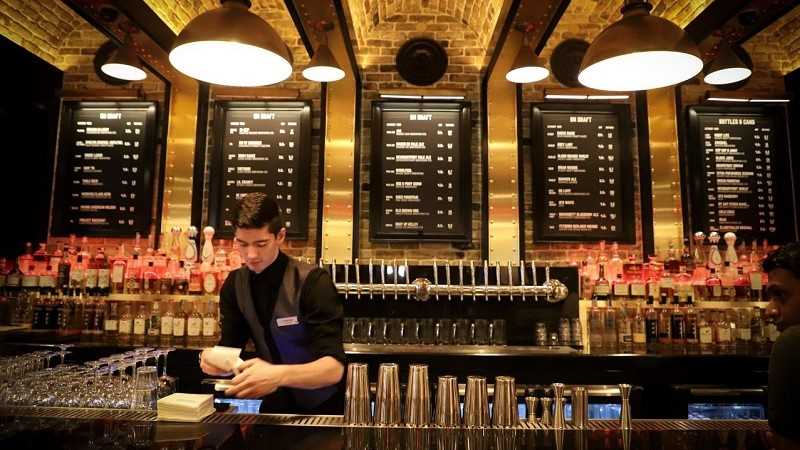 Everything ties into politics these days, doesn’t it?

First, the regulatory rigmarole of the Encore Boston Harbor threatened to derail the $2.6 billion project on more than one occasion. Then, the political fallout surrounding Steve Wynn’s alleged sexual misconduct caused another delay, including the potential withholding of the venue’s gambling license even as the casino resort was nearly fully built.

Now, as forewarned by former Democratic Presidential candidate and political newcomer Andrew Yang, automation is slashing some of the jobs from the casino.

As reported by ABC’s WCVB5, the Encore Boston Harbor has replaced between 40-50 bartenders with automated drink-dispensing kiosks.

Remember, these (now former) jobs were a big part of the sales pitch from Wynn Resorts to the MA legislature when they sought to get this project off the ground in September 2014.

Now, with automation taking some of the positions over so quickly, there’s likely little confidence that every remaining job at the Encore is safe for the foreseeable future.

Obviously, the casino could have simply hired more bartenders, further endearing the venue to the local community. Now, the negative publicity of an employee purge just seven months into the casino’s operational existence is a reality that Wynn Resorts must face.

Management, of course, is explaining the move as a boon for the affected employees. Warren Richards, Encore’s executive director of food and beverage services, spins the issue:

“A lot of [the affected workers] actually moved into a higher hourly rate position stocking the bars with all of the product which is now automated.”

Long a regional political issue, Yang helped make automation part of the general national discourse, though it’s unclear whether or not the rank in file in Washington – and in statehouses nationwide – have paid enough attention.

Typically, when automation is mentioned, the public thinks of factories and assembly lines, as in the auto industry.

But these industries had their robot revolutions a long time ago.

No, the new automation – the automation that Yang did his best to warn everyone about (but perhaps didn’t explain in an adequately granular fashion) – is far more mundane and everyday in nature.

At the Encore Boston Harbor, automation has replaced the bartenders. At the local insurance office down the street, automation will replace the receptionist. Data entry jobs are on the outs, and content writing is on its last legs, too (gulp!). Bet on it.

Speaking of bets, casinos like the Encore Boston Harbor were – ironically – not able to take bets on Yang’s Presidential election odds, as the state legislature has been dragging its feet for nearly two years on the subject of legalizing sports betting.

However, even when the pastime is finally greenlit in the Bay State, it is unlikely that political betting will be part of the package.

But even if you can’t bet on Yang in Massachusetts, you can probably bet on some of his policies – and his warning.

When casinos become a bastion of blinking lights at the tables and slots as well as in the kitchen and bar, people are going to bail on them. Gamblers like to gamble, but the entire point of a brick-and-mortar casino is the human experience. Human service. Human touch. Without that, you might as well stay home.

Indeed, many gamblers are doing just that – staying home. Legitimate online casino sites have millions of US members playing their hundreds of casino, slot, and card games each day, and that number is simply growing.

States may do their best to limit or ban domestic online casino options in the hope that such will drive customers to retail gambling venues, but the impersonality of automation will kill that initiative in its tracks.

Online casinos are already superior in numerous appreciable – and sometimes critical – ways to their real-life counterparts, and without the human element, the giant structures may turn into giant white elephants sooner than later.